Hack Punt Tool is now on Youtube, complete with captions! Share with your friends, family, and frosh:

To celebrate the release, we had a played-from-youtube screening on September 11, 2013, (exactly 1 year and 7 months after HPT’s last stage performance). Over 50 people came to 6-120 for the premier!  The audience included the writers, cast members, old friends, and new frosh. Some awesome people even dressed up for the occasion: 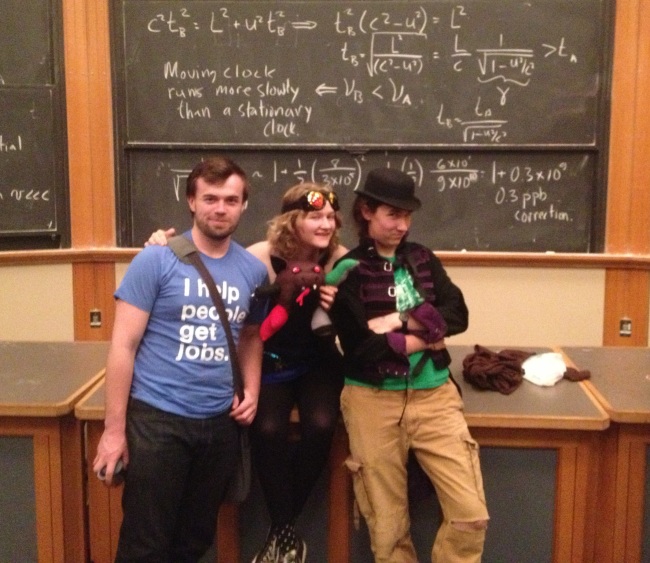 DVDs of the performance had been made and distributed to the cast and crew, but after a viewing to Tauntaun’s grad school friends in Lisbon, we quickly realized the benefits of adding captions. It took us about 6 months to pull together the captions and get the videos to youtube, but we think the effort was well worth the result.  Hope you enjoy!

Having been away from MIT for almost a year now, it made me immeasurably happy to see so many old friends together in the same room again. And it was amazing to look around the lecture hall when song came on and to hear not only familiar voices but also brand new voices singing along with vigorous energy. Sure, the lyrics are scrolling along the bottom of the screen, but how did everyone know the show so well?

Listening in on conversations going on around the room, it was clear that many people had developed quite an attachment to the characters and the story of Hack Punt Tool. Call me sappy and sentimental, but I definitely got a bit teary-eyed hearing a group of frosh arguing over whether Corot was justified in his actions towards Kepler, or whether Billy and Tess were *technically* breaking the November rule during Platonic Friends Again, or some other detail of the show that they were critiquing or comparing to their own lives in a genuine and whole-hearted fashion. It both amazes me and makes me super happy that something I helped create is taking on a life of it’s own and connecting new people to an old tradition, where the most important lesson is to work hard on projects you love with people you care about. It reminds me that no matter where I go, MIT will always be home.

I’m currently working as a researcher in the EAPS department, so I’ve been at MIT since HPT ended.  It continues to surprise me when I overhear people who weren’t involved with the production sing the songs or quote something from HPT.  On occasion, I’ve heard people adopt the language and names that we came up with for HPT to describe a thing or problem. When we started writing, I had some idea about how the show could influence the MIT community, but I wasn’t expecting it to pick up nearly as much as it has.

I’m super happy that something I helped make is being enjoyed long after the production was completed…it makes me feel all warm and fuzzy inside and have an even greater appreciation for MIT.

Who knows, maybe there will be another play or musical from the HPT team in the future?  I’m keeping my fingers crossed, because I would love to work on another project with a team as amazing as this one was.

Serious thanks to all who were involved with the writing and production, and to the old and new Hack, Punt, Tool fans!

Blog post below.  If you’re only looking to download the album, jump to the bottom for the link.

Wow, amazing that we’re finally able to release the Cast Album.  It’s been a long process for us, I never really expected the album to be such a big job.  It seemed like after writing a musical, releasing an album would be a piece of cake.  Well, I’m here to tell you that it’s not…. lol.

We originally recorded the album on February 19th, while the music was still fresh in everyone’s minds shortly after the show’s closing.  We were lucky enough to have enough equipment owned by the guild and its members to be able to set up and record the entire session ourselves.  We ran the recording session on MIT’s Kresge mainstage.  It was a grueling all day session, with equipment setup from 8 to noon, recording for about 6 straight hours, and equipment teardown for another 2 hours.  Here’s a fun little peek into the recording session that Daniel Sngiem recorded:

After the recording session, we began mixing and mastering the songs, learning a lot about music production as we went.  All of the recording and nearly all the mastering was done in Audacity.  Many months went by of trying to make progress, but unfortunately, jobs and classes got in the way for everyone.  We were still making progress, but slowly.  Finally at the end of the summer, we set a goal of the end of September for release, and seems that deadlines really do drive progress, as here we are today with a completed album.  It’s been a journey for us, another fun chapter in the life of HPT, and one that we hope you will enjoy!  You can download the album at http://hackpunttool.bandcamp.com/.  Check it out!  And if you like it, share it with your friends and family!

P.S. – Keep an eye out for a new lyrics page over the next three days!

You haven’t heard from us in awhile… but this post brings good news!  The cast album is nearly ready, and will be released on Saturday, September 29th.  We have been tooling furiously over the past several months to mix and master the album and bring you the best possible final product.  Keep an eye on the website for the link to the album!

Where with the album be available?

We will be posting the album for download on Bandcamp.com.  At this time it will not be available anywhere else.

How much will it cost?

The album will be available for free or for a donation.  All donations go to support the MIT Musical Theater Guild.

Can I get a physical CD instead of a download?

Links to them are also on the The Story and The Music pages.

Writer and Co-Director Rachel Bowens-Rubin has been working hard on her thesis since Hack, Punt, Tool ended, and she has proof!

Just look at this cover page!  But there are probably a few things that she should change once she can get HPT off her mind.

Is it the end, or just the beginning of… Hack, Punt, Two‽‽‽‽‽‽‽

At 6AM on Sunday, February 12, 2012, Rachel Bowens-Rubin announced her intention to write another musical.  See how the other writers respond (and the context) here:

Danbee Kim (Choreographer, Writer) spent a lot of time with post-its and pencil, mapping out details of the show like platform arrangements and changes inter- and intra-scene.

Oh, I guess some of it probably involves choreography of people too.

Before we blocked the counterbalance rappelling scene, I organized a “learn to rappel” session with a few of the cast and friends.  Among the cast (and dir staff) that came were Dgonz (Corot), Miles (Kepler), Jen (hacksemble), Molly (hacksemble), Jonny (Ryan), Caroline (Piston), and Tauntaun (writer and choreo). 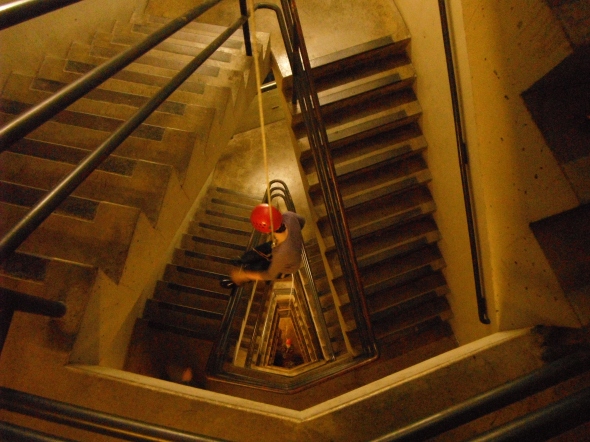 Since before auditions, I was thinking of organizing a session like this so that the actors who played Kepler and Corot could gain more experience doing ropework.  By my rappelling luck, we ended up casting dgonz as Corot, who has a fair amount of experience rappelling (in fact he helped me instruct the session with Jonny), and Miles as Kepler, who is an amazing secret ninja and picked up on everything really quickly. By the end of the night, Dgonz and Miles attempted something beyond a usual intro to rappelling skill… a real counterbalance rappel!

For those of you unfamiliar with counterbalance rappelling (and who didn’t understand the explanation in the show), in a counterbalance rappel the anchor is set up such that the rope is not tied off to anything.  Instead it’s wrapped around an object such that if you pull on one side of the rope, the rope comes off, but if you pull on both sides together the rope stays.  [Quick aside: I’ve used this technique once in real life in a canyon to rappel off a giant sandstone archway. My counterbalance partner was Itaru (secondary writer and unofficial ropes technician)]

Miles was completely up for trying the counterbalance rappel and eventually convinced Dgonz to do it (which is ironically opposite of their characters in HPT).   As they were descending, they sang “Counterbalance” which sounded incredibly beautiful echoing through the many stories of the staircase.  Check out the video!

Double thanks to Dgonz and Jonny who helped me rig and instruct.

Webmaster’s note: This was performed with permission from MIT’s EHS department and the manager of the building.